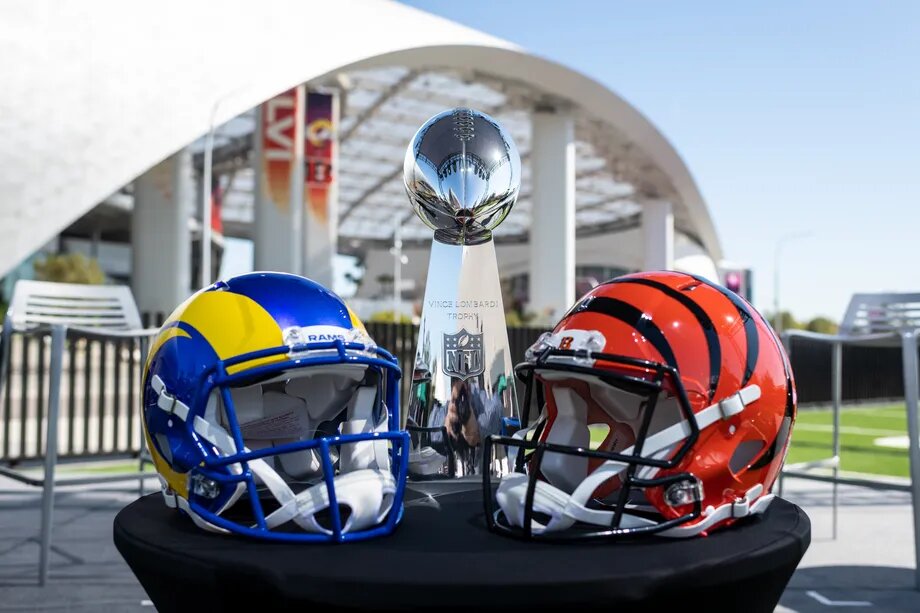 Why does the Super Bowl use Roman numerals to number their events? It is because a football season runs over two calendar years! From the victorious Lombardi trophy to some of the best starter quarterbacks and Super Bowl teams, as well as cinematic and unpredictable commercials and over-the-top halftime performances, there’s plenty for everyone to enjoy on Super Bowl Sunday.

These fun Super Bowl trivia questions and answers cover all of the bases. While some of the questions will likely be easy for a knowledgeable fan, there are several questions that will stump even the most diehard football fans. All of the answers are provided below the test. Waste no more time and let’s get into it!

1. Which player was paid $75,000 by Disney to shout “I’m going to Disney World” on the field moments after his Giants won Super Bowl XXI?
Answer: Phil Simms.

6. Which player is the only player in history to earn the honor of Super Bowl MVP as a member of the losing team?
Answer: Chuck Howley.

7. Which team recorded a hit rap song called “Super Bowl Shuffle,” which was nominated for a Grammy Award for Best Rhythm and Blues Performance by a Duo or Group with Vocal?
Answer: 1985 Bears.

9. How much is an artist paid by NFL to perform at Super Bowl?
Answer: They perform for free.

10. What team has the most Super Bowl appearances, having played in 11 Super Bowl games?
Answer: The New England Patriots.

11. Which two teams are tied with the Most Super Bowl Wins?
Answer: The Steelers and The New England Patriots.

12. The Detroit Lions, Cleveland Browns, Houston Texans, and Jacksonville Jaguars all have one thing in common. What is that?
Answer: They have never made it to a Super Bowl.

13. Which is the only Super Bowl to use the Arabic numeral instead of the Roman Numeral?
Answer: Super Bowl 50 (L).

14. In 1971, a player got a heart attack and died while he was playing in the Super Bowl. But the game continued. What is the player’s name?
Answer: Chuck Hughes.

15. Which two cities have hosted the most Super Bowls?
Answer: Miami and New Orleans.

16. The Super Bowl LVIII in 2024 is to be hosted by which city?
Answer: Allegiant Stadium in Paradise, Nevada.

18. Which is the only team to play and win in their home stadium?
Answer: The Tampa Bay Buccaneers.

19. Who is the oldest player to play in a Super Bowl at 43 years old?
Answer: Tom Brady.

20. Who is The Lombardi Trophy named after?
Answer: Former Packers coach, Vince Lombardi.

21. How many times has Tom Brady won the Super Bowl MVP award, the most by any player?
Answer: Five times.

22. Who is the only starting quarterback to win a Super Bowl with two different teams: The Indianapolis Colts in 2007 and the Denver Broncos in 2016?
Answer: Peyton Manning.

23. Which team was the first Super Bowl-winning team to visit the White House in 1980?
Answer: The Pittsburgh Steelers.

24. Which city hosted Super Bowl XXXIX in 2005, and because they didn’t have enough hotel rooms to meet the NFL’s requirements, they had to recruit five docked cruise ships as “floating hotels” for the event?
Answer: Jacksonville, Florida.

25. According to the U.S. Department of Agriculture, Super Bowl Sunday is America’s “second-largest food consumption day.” Which other event beats that?
Answer: Thanksgiving Day.

26. Which US state has the highest number of quarterbacks, with Six Hall of Famers from its region?
Answer: Western Pennsylvania.

27. Which Super Bowl holds the top spot of the highest viewed Super Bowl, with 114.4 million viewers on average?
Answer: Super Bowl XLIX in 2015.

28. How many months does it take to craft the Lombardi Trophies?
Answer: Four months.

29. A power outage at New Orleans’s Superdome put Super Bowl XLVII on hold. How long did it last?
Answer: 34 minutes.

30. Who is the Mayor, who is 2008, had to send a truckload of Massachusetts delicacies to New York City where the food was donated to charity, as a result of The New England Patriots’ defeat of the Giants in Super Bowl XLII?
Answer: Mayor Thomas Menino.

31. What does QB mean in Super Bowl?
Answer: Quarterback.

32. The Miami Dolphins hold the record for the fewest points scored in a Super Bowl, where in 1972, they lost to Dallas. What are the scores?
Answer: 24-3.

33. Which Super Bowl was the first one in history that didn’t include cheerleaders because neither of the participating teams had a professional cheerleading squad?
Answer: Super Bowl XLV.

34. In which Super Bowl was NBC still in commercial when the second half kicked off, and so officials had to ask the teams to kick off again a second time?
Answer: Super Bowl I.

35. No sitting American president has ever attended a Super Bowl. True or False?
Answer: True.

36. Super Bowl bonuses are a thing, given to both members of the losing and winning teams. In 2021, every player on the triumphant team will pocket an extra $150,000 just for winning, whether they played or not. How much was given to each member of the losing team?
Answer: $75,000.

37. The event we now call the “Super Bowl” originally went by a duller name. What was it?
Answer: “The AFL-NFL World Championship Game.

38. Which team was invited to the White House in 2013 by Barack Obama, 40 years after winning Super Bowl VII?
Answer: The Miami Dolphins.

40. Which father-son duo is the first to make a Super Bowl appearance as head coach?
Answer: Kyle Shanahan and his dad, Mike Shanahan.

41. How long does it take to decide the location for a Super Bowl?
Answer: 3 years.

42. Super Bowl rings all have the same design. True or False?
Answer: False.

43. Which Super Bowl team is one with the most wins and the most losses as well?
Answer: The New England Patriots.

44. The coldest Super Bowl took place in which place in 1972?
Answer: New Orleans.

45. In 1992, on the show “The Simpsons”, someone correctly predicted that Washington would beat Buffalo in Super Bowl XXVI. The game was played three days later, and Buffalo won. Who made this prediction?
Answer: Lisa Simpson.

46. Which Super Bowl is the only one in its history that was never sold out?
Answer: Super Bowl I.

47. The highest Super Bowl score ever was by the San Francisco 49ers in Super Bowl XXIV. How many points was it?
Answer: 55 points.

48. Unlike attending most sporting events today, the Super Bowl only issues and accepts paper tickets and no e-tickets. True or False?
Answer: True.

49. What is the standard length of the Super Bowl halftime?
Answer: 12-15 minutes.

51. Which is the Only Super Bowl game that has gone into overtime, lasting three hours and 47 minutes from start to finish?
Answer: Super Bowl LI.

53. Which QB has the most Super Bowl rings?
Answer: Tom Brady.

54. NFL is the governing body of the Super Bowl. What does it stand for?
Answer: National Football League.

55. Over 700,000 footballs are produced annually for official NFL use and how many of them are used for the Super Bowl?
Answer: 108.

57. Which wildcard team was the first to win the Super Bowl?
Answer: Oakland Raiders.

58. What is the approximate amount spent on food and beer on Super Bowl Sunday?
Answer: $1.3 billion.

59. What player holds the record for most career rushing yards in Super Bowl games, with 354 total yards?
Answer: Franco Harris.

61. Who was the first Black quarterback to win a Super Bowl?
Answer: Doug Williams.

62. The lowest-scoring Super Bowl in history was Super Bowl LIII which saw the New England Patriots defeat the Los Angeles Rams. What were the scores?
Answer: 13-3.

63. A North Carolina man owns the only known recording of Super Bowl I, as CBS and NBC didn’t save it. The NFL countered his $1 million, made their own offer which he refused, and then they later decided to not buy it at all, yet warned him he’d face legal action if he sold it to anyone else. How much did the NFL propose to him?
Answer: $30,000.

64. Joe Montana helped cement his nickname after calming his team down in Super Bowl XXIII by pointing out John Candy sitting in the stands. What is the nickname?
Answer: “Joe Cool”.

66. No Super Bowl has ever ended in a shutout. True or False?
Answer: True.

67. Who is the only person to ever win a Heisman Trophy, College Football National Title, NFL MVP, a Super Bowl & Super Bowl MVP?
Answer: Marcus Allen.

68. Which celebrity artist was performing during the Super Bowl blackout in New Orleans?
Answer: Beyoncé.

69. The NFL restricts the use of the phrase “Super Bowl” for advertising purposes. True or False?
Answer: True.

70. During the Super Bowl Media day in 2000, a presenter asked Joe Salave’a what his relationship with football was. What was his response?
Answer: “…It is strictly Platonic”.

71. According to statistics, shows starting immediately after the Super Bowl get high viewership. True or False?
Answer: True.

Did you enjoy these fun Super Bowl trivia questions? Please leave a comment below and share if you like the content. Do you know that Wife Carrying is a sport?  Check out 30 weird sports around the world and 86 Fun Sports Trivia Questions and Answers