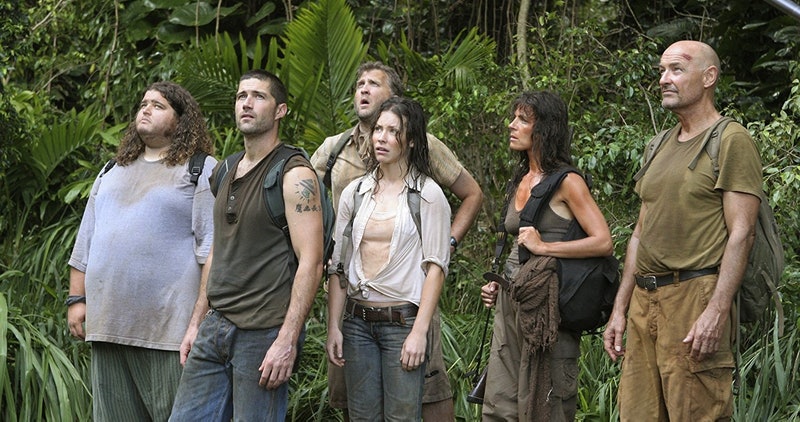 Lost is an American drama movie series that was produced by ABC and aired on the UK channel 4. The movie series is made up of science fiction and supernatural elements. The story is told in a heavily serialized manner and it is made up of 6 seasons and 121 episodes. Are you a fan of this series or have you heard about it? This fascinating trivia game was crafted to help you call back the scenes and actions “Lost”, to help you preserve the sweet memory of this incredible movie. Click on the “Show Answer” to show see the answer to any question you are not confident about the answer.

1. The phrase that Hurley used to describe himself to the cops was?

3. What was the last thing that Naomi requested?


Tell her sister she loves her

4. Hurley told the detective that he was friends with Anna and knew her very well. True or false?

5. What is the name of the person that visits Hurley at the mental Institute? Kate or Jack?

6. Faraday, Miles, Charlotte, and Lapidus were selected for the team because of their skills to perform a specific purpose. True or false?

7. What did Charlotte find in the desert? Polar bear skeleton or the lost ark?

8. Lapidus knew the flight 815 pilot shown in the wreckage isn’t who they say he is because He’s not wearing a wedding ring. True or false?

9. The middle name of Charlotte is? Susan or Staples?

10. A bracelet was not what made Sayid more humane towards Naomi and Elsa. True or false?

11. What was that particular thing that Elsa wanted from Sayid? His boss or his love?

12. What is the name of the person that helped to trap Kate and Sayid? Rose or Hurley?

13. Sayid traded Charlotte for which thing? Food or Miles?

14. What did Sayid tell Kate as his reason for staying on the island?


There’s nothing back there for him

16. Kate stayed with Locke’s group to get information from Miles. True or false?

17. Did Desmond and Sayid make it to the freighter okay? Yes or no?

18. What did Minkowski say that is causing everyone to go crazy? Lead poisoning or proximity to the island?


Proximity to the island

19. Kate was later pregnant while still on the island. True or false?

21. Has Penny known about the island and researched it? Yes or no?

22. Who among Charlotte and Desmond was Faraday’s constant?

23. What was the last name of Harper? Hopeman or Stanhope?

24. What did Julie tell Jack the Tempest is? A radiation station or electrical station?

25. Faraday and Charlotte wanted to release the gas and kill everyone on the island. True or false?

26. Sawyer’s character was originally thought of as being an older, classy con man from Buffalo. True or false?

27. In the scenes where Charlie is doing heroin, what was used as the heroin? Powder or sugar?

28. What is the name of the person that acted as Charlie?

29. Michael Keaton was not originally cast in the role of Jack. True or false?

30. What was the name of the ABC entertainment drama development manager?

31. From when did the series start and when did it end?

32. What is the name of the studio that made this movie? A and B studios or ABC studios?

33. What was the name of the then chairman of ABC entertainment in 2003?

34. According to the writers, midway through the pilot episode, Jack was supposed to die. True or false?

35. What is the name of the person that later played the role of Jack after Keaton was out?

36. Which character did the writers create after their first impressions of Kim?

37. Who was the only member of the principal cast who didn’t have to audition?

38. The Dharma Initiative was not originally called Medusa Corp. True or false?

40. Which animal was originally going to be used as the polar bear who charges at Sawyer? Buffalo or wild boar?

41. Who was the first actor cast on the show?

43. ABC entertainment told the producers that they shouldn’t kill off the hero so soon in the series and the script was changed. True or false?

45. The movie series is the most successful debut for a US series on Channel 4 UK. Yes or no?

46. What was the number of viewers that viewed the series on its debut? 4 million or 6 million?

47. Josh Holloway didn’t cover up his Southern accent while shooting several of his first scenes. True or false?

48. Why was the reason behind Josh Holloway’s employment for the movie which he didn’t know until he was told? His height or his accent?

49. What did Yunjin Kim originally think of the Sun character? She was too rebellious or she was too submissive?


She was too submissive

50. What is the name of the character of Mr. Adewale Akinnuoye-Agbaje? Mr. Beko or Mr. Eko?

52. J.J. Abrams was contacted to create the series because his series Alias (2001) was a hit for the network. True or false?

53. Were parts of the plane used as percussion instruments? Yes or no?

54. What was the last name of the husband of Sun-Hwa? Lee or Kwon?

55. Andrea Gabriel (Nadia)appeared on the island in all the seasons of the series. True or false?

56. Did Jeremy Davies write some of the equations Faraday writes for Desmond on the flashbacks in season 4? Yes or no?

57. The ornate tattoos on Jack’s shoulder are Matthew Fox’s own. True or false?

58. Lillian Hurst (Carmen Reyes)appeared in all the seasons but not on the island. Yes or no?

59. Which role did Jon Hamm audition for? Hurley or Jack shepherd?

60. While acting, was speaking Korean a challenge to Daniel Dae Kim? Yes or no?

61. Whose shoulder tattoo reads, “Living is easy with eyes closed”. Charlie or Daniel?

62. Playing the role of Korean descent in Lost wasn’t Daniel Kim’s first time. Yes or no?


No, it was his first

63. Which practice of wrapping a baby was John Locke against in real life but used it in the movie Lost? Curling or swaddling?

64. When was Charlie confronted by Cindy in the show? When the plane was about to take off or when it was about to crash?


When it was about to crash

65. What is the name of the movie that made J. J Abrams cast Jorge Garcia after seeing him act there? The man called God or Curb Your Enthusiasm?

66. What is the French name of this movie series?

67. While season 3 was on the air, the ratings were somewhat declining. True or false?

68. What is the name of the scientist that Daniel Faraday was named after?

69. Vincent, the dog, is actually played by a female dog, whose name is Madison. True or false?

70. Where were the Jungle scenes depicting open, grassy pasture areas at the foot of jagged cliffs filmed? Amazon forest or Kaaawa valley?

71. What is the name of the scientist that George Minkowski was named after?

72. Before there was a script, ABC picked up the show. How true is this statement? False or true?

73. Where was the sound stage where the cave scenes were filmed? Texas or an old Xerox building?

74. Who was the person that did the narration for the advertisements for The Hanso Foundation? The show creator or the executive producer?

75. What is the name of the Spanish sci-fi movie that was an inspiration while acting in a time travel storyline? Timecrimes or Extraterrestrial?

77. What is the meaning of the Chinese symbol that Claire wears around her neck? Hope or love?

78. Which character has the most centric episodes in the movie series? Charlie or Jack shepherd?

80. Did the series make use of rotating directors to allow multiple episodes to be in production at the same time? Yes or no?

Fan of James Bond? Try this; Which year did Sean Connery star in the James Bond movie Dr. No? Check out the answers and more 86 Fun Movie Trivia Questions and Answers