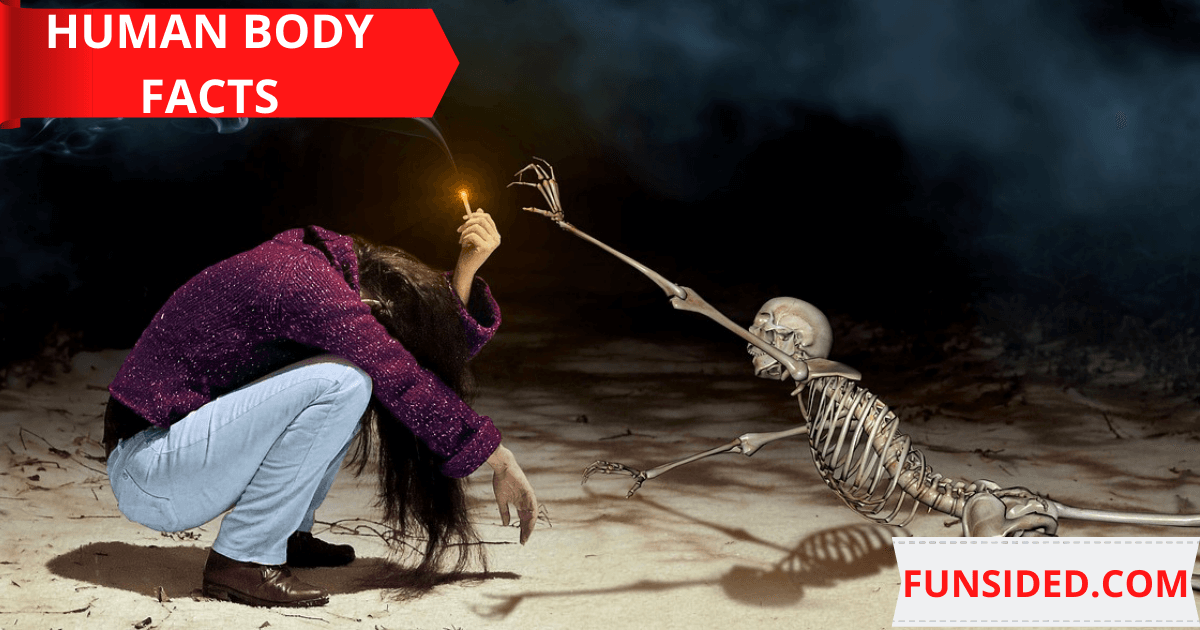 The human body is a mystery and a complex piece of engineering in which every part of the body plays a vital role for us to function properly. In this article, you will uncover some less-known human body facts that will blow your mind.

1. The human body burns more calories when they sleep than when they watch Television.

5. On average, an adult excretes about 1.42 liters of urine per day.

6. Due to the way cartilages compress during the day, humans are 8mm taller in the morning than in the night.

9. The strongest and longest bone in the human body is the “Femur”.

10. Unlike your toenails, your fingernail grows four times faster.

11. The human body has between 2-5 million sweat glands that are why you tend to sweat more the more active you work out.

12. The human skull is made up of over 29 different bones.

14. Unlike other body parts, the cornea doesn’t receive blood supply but receives oxygen directly from the air. The cornea is responsible for how light enters the eyes.

15. The human brain has a storage capacity of more than four terabytes.

16. The human stomach turns red when they blush.

18. Humans with blue eyes are more sensitive to pain than others.

19. The tongue is the strongest muscle in the human body.

20. The right lung can take in more air than the left.

22. Sperm cells are the smallest in a man’s body.

24. The human eyes have the ability to decipher over 10 million different colors.

27. The rate at which nerve cells receive signals from the brain is around 274km/h.

30. The surface area of a tennis court is equal to that of the human lungs.

31. The chemical that causes humans to be ecstatic (phenylethylamine) can also be found in chocolates.

34. According to research, people stand a high chance of having heart attacks on Mondays than on any other day of the week.

36. You can’t sneeze with your eyes opened.

38. While the human eyes remain the same from birth, the ears and nose don’t stop growing.

39. Research suggests children grow faster in the spring than in any other season.

Do you know that psychology suggests that people tend to look up and their left side when they are lying? Click to Uncover more Shocking psychology facts and research.

41. Despite the human brain weighing just 1.5kg in the body, it uses up to 20% of its energy more than any other organ in the body.

42. The largest organ in the human body is the skin.

43. An eyelash lives up to five months before falling off.

44. The smallest bone in the human body is called the Stirrup. It’s found in the middle of the ear and it’s 2.8mm long.

45. Despite having unique fingerprints, humans also have unique tongue prints.

46. The fats in the human body can make up to seven bars of soap.

47. The small intestine in a human body is approximately 23 feet long.

49. In photography terms, the human eyes are up to 567 million megapixels

52. The acid (Hydrochloric) in the human stomach is capable of melting a razor blade.

55. Every human has a unique smell except identical twins.

57. Statistically, over 90% of human diseases are caused by stress.

59. The only muscle that doesn’t wear out in the body is the heart.

61. On average, most human beings spend almost a year sitting down on the toilet seat.

62. Infants are born with an estimated 300 bones but as they grow older it reduces to 206 bones.

64. Your brain can generate enough electricity to power a small light bulb.

66. The human hair is where most information about a human is stored.  Contents of your blood like alcohol, drug, and vitamins can be found by testing your hair.

68. The human skeleton rebuilds itself every 10 years.

70. Your kidney filters all your blood about 25 times daily.

71. The liver can full regrowth to its original size even after cutting 70% of the whole organ.

72. Your heartbeat matches the rhythm of the music you are listening to.

73. The same enzymes that help digest the food we eat, also start the decay of our body when we die.

74. Some atoms in our body are billions of years old.

76. The human body contains gold.  Its quantity is about 2.3 milligrams. You will need the blood of 40000 people to make 1 gram of coins.

77. Humans lose half a liter of water from breathing daily.

78. Most pregnant women mostly dream about frogs and worms, 3 months into their pregnancy.

79. Newborn babies see everything upside down, as their eyes have not started inverting images.

80. Babies are born without kneeling caps.

Do you know that Dynamites are shockingly made from Peanuts? Click to discover more Surprising Facts about the foods we eat.