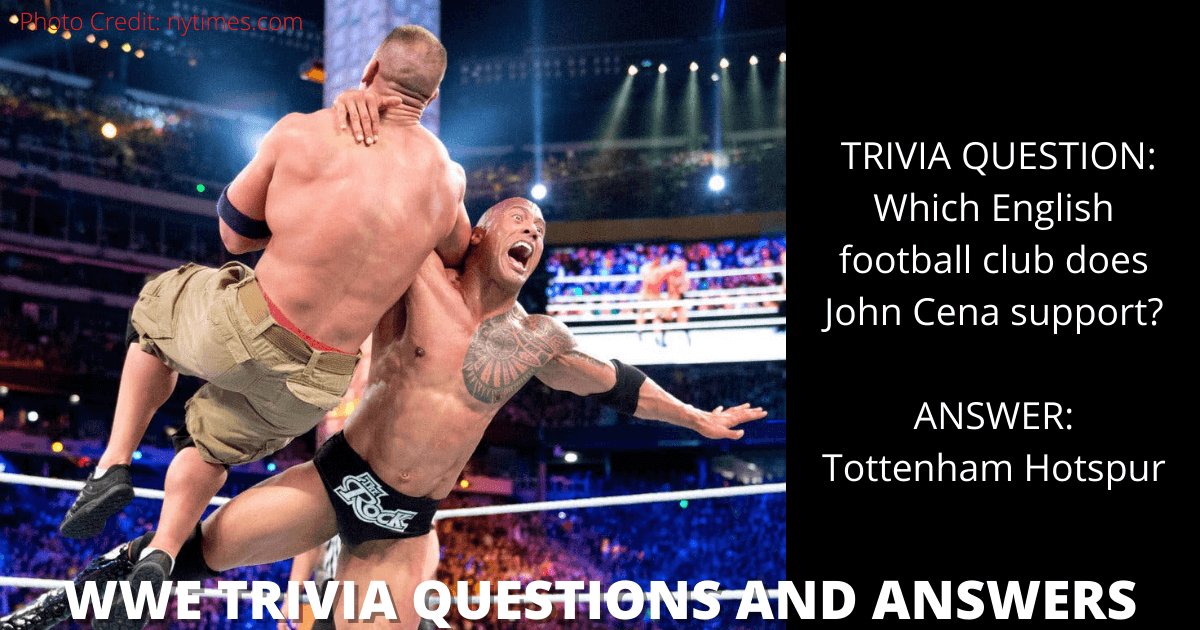 The WWE is one of the most entertaining shows on the planet. How much do you know of your favorite stars and divas? Test your knowledge of the show with the following fun and interesting trivia questions.

1. The Great Khali is from which country?

2. What is Great Khali’s finish move?

3. The only superstar to have won the International Championship eight times is?

4. Who is famous for saying “Excuse me”?

5. Which Diva has the same first and last name?

6. RKO is particular to which WWE superstar?

7. Who holds the record for the longest time spent fighting in the ring for a Royal Rumble match?

8. The rematch between Hulk Hogan and Andre the Giant at The Main Event in 1988 is famous for being?

9. Who did former US President Donald Trump fight in the ring?

11. Which superstar won the very first Money in the Bank event?

12. How many Royal Rumbles has Stone Cold Steve Austin won?

15. Triple H and Shawn Michaels belong to which group?

16. Walls of Jericho is whose finisher?

18. Which Diva is the longest-reigning champion?

21. The first overall draft in the WWE is?

22. Stephanie McMahon is known for being whose daughter?

25. Which red-headed diva is famous for faking injuries to avoid a match?

26. John Cena and Nikki Bella are both famous as?

27. Who defeated John Cena in 2011 to become the unanimous WWE champion?

28. The WrestleMania officially debuted in what year +

29. The Alliance is a combination of which championships?

31. John Cena’s debut was against who?

32. Triple H and Randy Orton fought a Steel Cage Match in 2008 at which tournament?

33. Daniel Bryan debuted in which season of the NXT?

34. Mark Henry’s debut was against?

How many teaspoons of sugar make up a Can of coke? Check out more General Knowledge Trivia Questions and Answers Here.

35. How many WWE championships did Hulk Hogan win?

36. Was Kane part of the Ministry of Darkness?

37. Which of these superstars is now a politician? Hulk Hogan, Kane, and R Truth.

38. “Awesome” is particularly attributed to who?

39. Which superstar was the first Unanimous WWE champion?

40. Who is the first superstar to pin Mr Perfect?

41. Uncle Elmer was the opponent of Adorable” Adrian Adonis at which WrestleMania tournament?

42. Which diva was drafted to SmackDown?

43. The attitude adjustment is particularly attributed to?

44. John Morrison and Edge were two of three stars who were drafted after the battle Royal. Who is the third person?

46. What year did Ric Flair retire from WWE?

48. The first female wrestler is the history of the WWE is?

49. Goldust6made his debut in what hear6?

50. What is Vince McMahon’s father’s name?