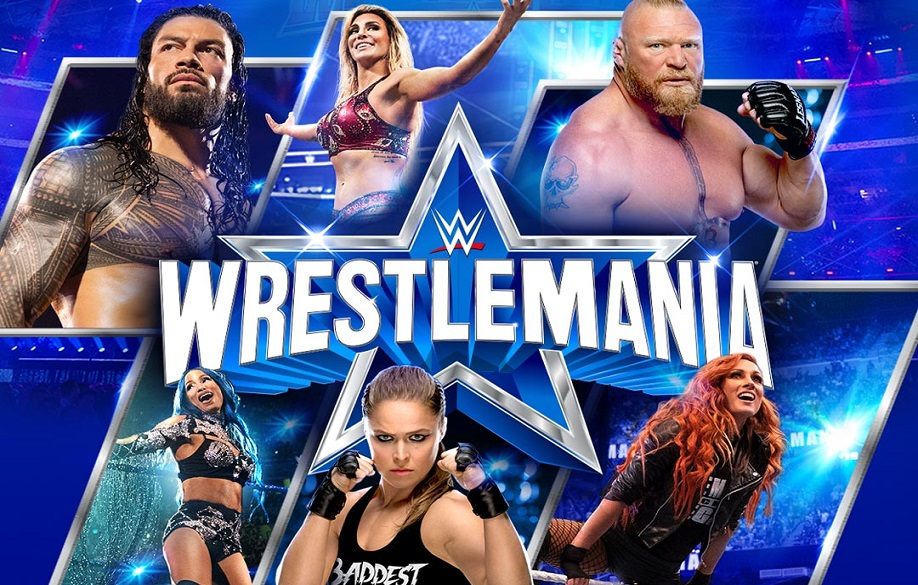 If you are a wresting lover or a huge WWE fan, then you’ll definitely want to take this trivia with all enthusiasm. Although the WWE storylines are planned, there’s no way to fake a back flip off the top turnbuckle or a choke-slam through a table!

These WWE Trivia questions are exciting, informative, and thrilling. It will have you recollecting your favorite WrestleMania memories, the best challengers, and Royal Rumble champions of all times. I’m sure you’re probably hitting drum rolls by now and feeling the heat already. So let’s get into it!

2. How many alternate names have the WWE World Heavyweight Championship belt had since its introduction in 1963?
Answer: 8.

3. How many WWE World Heavyweight Champions has there been since the beginning of the event?
Answer: 120

4. Who are the three wrestlers tied with a total of 8 WWE World Heavyweight Championship wins?
Answer: The Rock, Triple H, and Randy Orton.

6. Which type of vehicle did Roman Reigns hit Kevin Owen with during their Last Man Standing Match?
Answer: A golf cart.

8. What is the most-watched wrestling match in North America’s history?
Answer: Hulk Hogan and Andre the Giant’s 1988 rematch.

9. Which champion holds the record for most Royal Rumble eliminations of all time, having eliminated 44 competitors over 19 Rumble appearances?
Answer: Kane.

10. Which wrestler holds the record for the longest time spent in the ring during a Royal Rumble?
Answer: Rey Mysterio.

11. Which professional wrestler became a writer for Marvel Comics and Vertigo Comics after leaving the WWE?
Answer: CM Punk.

13. Which WWE diva has held the Women’s Championship 8 times before the belt was retired in 2010?
Answer: Trish Stratus.

15. Who was the first WWE Cruiserweight Champion, when the title was under the name of the WCW Light Heavyweight Championship?
Answer: Brian Pillman

16. The Gulf of Mexico Match, February 2008 is one of the most bizarre WWE matches. The wrestlers fought one another out on the street in the middle of the night, and the winner was whoever could toss the other person into the chilly waters of the Gulf of Mexico. Who were the fighters involved?
Answer: CM Punk and Chavo Guerrero.

18. Who was the first WWE Women’s Champion ever?
Answer: The Fabulous Moolah.

19. Who was the first-ever WWE European Champion in WWE history?
Answer: British Bulldog.

20. Who was the first-ever WWE Hardcore Champion?
Answer: Mankind.

21. Who did Triple H defeat to become the first World Heavyweight Champion on an episode of “Raw” in September of 2002?
Answer: Nobody.

22. Who was the first-ever Champion when the WWE was known as the WWWF World Heavyweight Championship?
Answer: Buddy Rogers.

23. Who is the longest-reigning WWE Intercontinental Champion of all time?
Answer: Honky Tonk Man.

24. Which wrestler in the WWE history books became the fastest challenger to seize championship gold from a reigning titleholder in a WWE match?
Answer: Spike Dudley against William Regal.

25. Which United States President is a member of the WWE Hall of Fame?
Answer: Donald Trump.

26. When and where did the very first-ever WrestleMania event take place?
Answer: Madison Square Garden, on March 31, 1985.

27. Who did Rob Van Dam defeat for his first Intercontinental Championship Title in 2002?
Answer: William Regal.

28. Who are the founders of the WWE?
Answer: The McMahon family.

29. Which WrestleMania Women’s match is the first to last beyond 10 minutes?
Answer: WrestleMania 32, between Charlotte Flair, Becky Lynch, and Sasha Banks.

30. On which day of the week is WrestleMania usually held?
Answer: Sunday.

31. Which WrestleMania is the first to not hold on a Sunday?
Answer: WrestleMania 2. It took place on Monday, April 7, 1986.

32. What does WWE stand for?
Answer: World Wrestling Entertainment.

33. What was it called before it became WWE?
Answer: World Wrestling Federation (WWF).

34. Why did WWF change its name to WWE?
Answer: The organization changed its name following a lawsuit by the World Wildlife Fund, which also goes by WWF.

35. How many WWE World Championship victories does John Cena have?
Answer: 16.

37. Which recent WrestleMania beat the record of Wrestle Mania 3 to become the most attended in the history of WWE with an attendance record of 101,763 people?
Answer: WrestleMania 32 was held in 2016, at Arlington’s AT&T Stadium.

38. In what year did WWE ban performers from bleeding in the ring?
Answer: 2008.

39. What is the name of the mayor of Knox County, Tennessee, who is a former WWE champion of the 1900s?
Answer: Glenn Jacobs.

40. Just like other sports, is there ever an off-season in WWE?
Answer: No, WWE has no off-season.

41. Who is the Executive Vice President of the WWE?
Answer: Triple H.

42. Who has won the maximum Royal Rumble and how many wins does he have?
Answer: Stone Cold’ Steve.

43. Which wrestler uses the phrase, “This is my house”?
Answer: Paige.

44. Who is the first Smackdown Women’s Champion?
Answer: Becky Lynch.

45. Which diva has her first name as her last name?
Answer: Kelly Kelly.

46. What is the name of the WWE chairman’s daughter who is married to Triple H?
Answer: Stephanie McMahon.

47. What is the name of the longest-reigning Divas champion who was also John Cena’s ex-fiancée?
Answer: Nicki Bella.

48. How many episodes of Smackdown has there been so far?
Answer: 600.

50. Which superstar’s entry music quotes: “…they broke the mold when they made me”?
Answer: Dolph Ziggler.

51. Which two superstars hold the record for the most championships in WWE?
Answer: John Cena and Ric Flair.

52. Which US city has hosted 2 WrestleMania contests?
Answer: New York.

53. Where is the WWE performance center?
Answer: Orlando, Florida.

54. Who is the first African-American to hold a WWE world title?
Answer: Jacqueline.

55. Who never won a single belt in his entire WWE career?
Answer: Jake The Snake Roberts.

56. Why did WWE exclude Michigan from pay-per-view access to the WrestleMania 3?
Answer: The only way to view the show was to watch it live in the stadium. So they did that as a tactic to get people to attend the show.

57. WrestleMania 6 was the first ‘Mania to be held outside the United States of America. Where did it take place?
Answer: It was held at the SkyDome in Toronto, Canada.

59. The most decorated tag team in WWE history, who has held tag team gold a total of 24 different times. Who are they?
Answer: The Dudley Boyz.

60. Which WrestleMania match was the first to be held outdoors? And where did it hold?
Answer: WrestleMania 9, held at Caesars Palace in Paradise, Nevada.

61. How long did it take The Rock to defeat Eric Rowan at WrestleMania 32?
Answer: Only 6 seconds.

62. According to Forbes in 2017, how much is WWE worth?
Answer: In 2017, Forbes estimated WrestleMania’s worth to be $195 million, making it the 6th biggest Sports brand.

63. Who has the most match losses in WrestleMania?
Answer: Triple H.

65. Who was the man that brought an end to Bruno Sammartino’s titanic reign in 1971?
Answer: Ivan Koloff, “The Russian Bear”.

66. Who is the oldest WWE Champion in the brand’s history?
Answer: Vince McMahon, who won the title when he was 54.

68. The distinction of the shortest ever WWE title reign belongs to Andre the Giant when he beat Hulk Hogan for the title in 1988. How long did it last?
Answer: 1 minute and 48 seconds.

69. Which WrestleMania event was the first to feature two wrestlers who used their real names?
Answer: WrestleMania 19 between Brock Lesnar and Kurt Angle.

70. WWE’s Inferno match is one in which the ring is set on fire and the first opponent to catch fire is the loser. The match is so dangerous that it has only taken place four times in total. Which wrestler has featured in this match all those 4 times?
Answer: Kane.

71. The wrestler with the unfortunate honor of the quickest loss in WWE history was defeated by Jerry Lawler in only 3 seconds. Who is he?
Answer: Tazz.

Did you enjoy these fun WWE trivia questions? Please leave a comment below and share if you like the content. Do you know that Wife Carrying is a sport?  Check out 30 weird sports around the world and 86 Fun Sports Trivia Questions and Answers