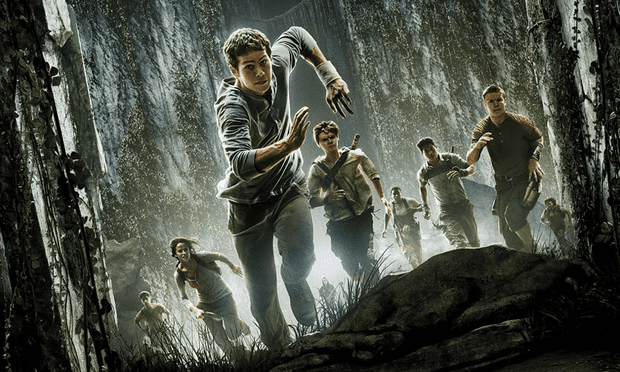 The Maze Runner: ‘I’d compare the movie to a season one episode of Star Trek: The Next Generation’ Photograph: mazerunnermovie.com

1. Before the filming began, the production hired snake wranglers to make the areas that they were filming snake-free. True or false?

3. To remember to leap, Thomas Brodie-Sangster would put a rock where? Shoe or Cap?

4. What is the name of the actor that acted as Chuck in the movie?

5. What was one of the doest things that Thomas remembered when he entered the glade? His age or Images of people with smeared faces?


Images of people with smeared faces

8. Was a chopper one of the jobs that people had in the glade? Yes or no?

9. What word is written on the beetle blades’ backs? Wicked or grieve?

10. What was the first thing that Thomas was called by the Gladers and what does it mean?

11. What happens to you when you get stung by the griever? Death or the changing?

12. What is the name of the last “Greenbean” before Thomas arrived?

13. The runner investigates the Maze. True or false?

14. Teresa’s arrival to the Maze caused what? The saving or the ending?

15. Who is the first person Thomas had a conversation with when he arrived at the maze?

16. The part of the maze where the boys live and where runners return to at night is called?

17. What is Minho the leader of the runners known as?


Keeper of the Runners

19. How frequently does the layout of the maze change? Weekly or daily?

20. What was Thomas doing on his first day working on the crops? Digging the soil or fetching the fertilizer?

21. A new arrival usually comes up on the elevator every? Month or week?

22. What did the note that Teresa had in her hand when she arrived read?


She’s the last one ever

23. What name did the scientist place on the catastrophic event which had devastated life on the planet? The fire or the flare?

25. What is the name of the actor that acted as Newt?

26. The cast was taught how to build tools and shelter out of the surrounding nature. True or false?

27. What is the name of the scientist that the character Newt was named after?

29. In the book, how did Teresa and Thomas communicate? Telephone or each other’s mind?

30. What was the original name of the Maze Runner?


Lord of the Flies meets Lost

31. How is the acronym W.C.K.D pronounced in the movie?

32. In the novel, the walls of the maze were much taller than how it was portrayed in the movie. True or false?

33. Where are Wes Ball and Wyck Godfrey’s names written? On the maze or the Glader name wall?

34. Who did Dylan O’Brien have a wrestling sequence with? Craig Braun or Will Poulter?

35. Who did Kaya Scodelario shoot with on a tree which she later described as her favorite scene? Thomas or O’Brian?

36. What is the name of the actor that broke his cheekbone while filming the maze runner?

37. Did the filmmakers test the cast members’ physical abilities to run and jump before filming? Yes or no?

38. Who wanted Kaya Scodelario to play Teresa from the beginning?

39. Who auditioned for both Gally and Newt? Thomas Brodie-Sangster or Will Poulter?

40. The similarity they the grievers have in both the movie and novel is that they both have legs and run. True or false?

41. What did the producers change that happened in the novel between Teresa and Thomas? Love or telepathy?

42. In the novel, Newt calls Thomas by his name. True or false?

43. What is the name of the director that directed this movie?

44. In the movie it rains in the glades and in the novel, it doesn’t. Is it true or not?

45. Did Thomas Brodie-Sangster ever read the Maze Runner book? Yes or no?

46. What is the name of the studio that offered Wes Ball the opportunity to direct The Maze Runner?

47. What was Ki Hong’s favorite slang for The Maze Runner book in the movie? Klunk or shuck?

48. What is the name of the movie that influenced Wes’ style in directing the Maze Runner?

49. What was Will Poulter’s favorite slang from the Maze runner book? shuck or shank?

50. What is the name of the actor that played the role of Minho?

51. What is the name of the swear words that the gliders used in the book?

52. Did Wes Ball ever meet the artist that created the concept artwork for the film? Yes or no?

53. Did Wes Ball watch Terrence Malick for inspiration? Yes or no?

54. The Maze Runner was not the first all-digital release film by 20th Century Fox. True or false?

55. Was the scene of Scodelario’s character arriving in the middle of the glade surrounded by 30 boys the first scene she shot? Yes or no?

56. How many acres of a local farm did the production use for the filming? 40 acres or 18 acres?

58. The ending of the first movie was not the beginning of the second. True or false?

61. Who was the person that shot an arrow at Ben in the Maze Runner book? Alby or Thomas?

62. Who was the person that was originally set to direct the movie?

63. What is the name of the actor that has starred in season 1 of the Nickelodeon show Victorious (2010)?

64. Was the part where Teresa spent some time in the pit in the book appear in the movie? Yes or no?

65. What was the name that can be seen when Thomas (Dylan O’Brien) was carving his name on the wall? Bill or Scott?

66. Who was the first person that went to the glade? Minho or Alby?

67. How many months did Alby stay in the glade alone? 2 months or 1 month?

69. Did Patricia Clarkson feature in the Maze Runner movie? Yes or no?

72. Which part of the intricate maze was Thomas in? The last part or the middle part?

73. Did Kaya Scodelario feature in this movie? Yes or no?

75. How big was the biggest snake that was found by the snake wranglers that were hired by the production?

76. Except for Thomas Brodie-Sangster, was there any other British cast that was allowed to keep their British accent? Yes or no?

77. Was Wes Ball’s name also written on the glade name wall? Yes or no?

78. Did producer Wyck Godfrey take casting advice from his children?

79. Wyck Godfrey’s name was not written on the glade name wall. True or false?

80. Was the maze contained within a dome? Yes or no?

81. Was the weather and sky in the movie real or artificial?