Top Interesting Stories and Events of 2022

2022 just like every other year starting on Saturday of the Gregorian calendar, is the 22nd year of the 3rd millennium, and the 22nd year of the 21st century. We have already seen some interesting events unfolding in 2022, some are happy events while some are sad events. We are going to explore things that have already happened and some top events we are expecting this year.

January 2
● A protest began in Kazakhstan owing to a high increment in petrol price.

● The United States becomes the first country to reach one million daily infections, mainly caused by the omicron variant.

● All the five permanent members of the United Nations security council – which include the United States, China, France, Russia, and United Kingdom – made a rare statement together saying that “a nuclear war cannot be won and must not be fought”

● Prime Minister Askar Mamin and his cabinet resign because of the mass protest in Kazakhstan and he is replaced with his deputy Alihan Smaiylov.

● Bahamian-American actor Sidney Poitier dies at aged 94. He was the first black man to win the Academy Award for best actor.

● United States – The first successful heart transplant from a pig to a human patient is reported.

● Alleged artificial sun, lunched by China surface on the internet.

● 2022 winter Olympics is scheduled to start in Beijing China.

● Queen Elizabeth II will celebrate her Platinum Jubilee, marking 70 years on the throne, a distinction that no other British monarch before her has ever held.

● America goes to the polls for the 2022 midterm U.S. elections which will select the 118th Congress, state, and local officials. It will be the first election after the redistricting reflecting the 2020 U.S. Census.

● The FIFA World Cup kicks off in Qatar. The world will be witness to a global football competition the likes of which has never been seen before. Never in history has the World Cup been staged in an Arab country, a Muslim country, in Winter, or in a country as small as Qatar. 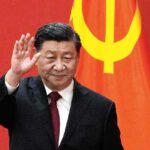